Flooding is one the natural hazards occurred in Alegria, Surigao del Norte. Destructive flooding had caused the damages on lives and properties especially on the vulnerable sector and areas within the locality especially on the exposed people such as children and barangays to flood including the agriculture among others.

Due to torrential rain as the result of Tropical Storm Auring (Dujuan) in February 21, 2021, the steel bridge in Barangay Budlingin was destroyed around 11AM due to heavy rain. Meanwhile, the Barangay San Juan highway to Barangay Pongtud in Municipality of Alegria, Surigao del Norte was flooded due to TS #AuringPH rain.

Some 15 families with 58 individuals in Barangay Pongtud, Municipality of Alegria, Surigao del Norte are affected by flooding due to Tropical Depression #VickyPH occurred last December 18, 2020. The heavy flooding in Purok 6 of the said barangays is due to the inaccessibility drainage of flood water hence the water flooded the homes along the national highway of said purok.

Most of the flooding happened were brought about by unfavorable weather disturbances especially caused by tropical cyclones that affect the municipality of Alegria, Surigao del Norte.

The MDRRMC Meeting on July 2020 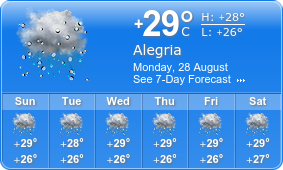